Bill was born in Laurinburg, NC. His mom Carlie was 16 at the time, and Dad was born prematurely. He tells us he was swaddled in a shoe box he was so tiny and fragile! Nonetheless he grew to be over six feet tall, an accomplished athlete and powerful businessman. His mom was one of 11 children; her mom (Dad’s grandmother) died when Carlie was a young girl, and they were living on a farm.

Like most families after the depression, his family was poor. His father’s father had died when Bill’s dad was 13 years old and he dropped out of school to help the family. Bill’s dad took what work he could find – he was a newspaper type setter. In 1924 the family moved to New York City, then later to Richmond, VA, then Forest City where Bill’s brother Harry was born, then to Charlotte, NC where Dad spent most of his youth.

His father worked out of town, and would get on the bus each week, all dressed in a suit. He then spent five days away from home working the printing presses, and would change back into his suit for the bus journey home. Bill’s dad liked to read a lot, and was a generally quiet, reserved man. Dad figured out early on that he wanted to go to high school “on the other side of the tracks” to better his standing in life so he took a paper route to earn spending money and buy his own clothes, and ended up riding his bicycle across town to school each day. He did admit that meeting the nice girls was one of his main motivations.

One of his first purchases was a suit coat – for dating. Of course, we all know he was more comfortable in a jacket than just about anything else, and he continued wearing them. While many men grumble at the “jacket required” rule in clubs and restaurants, Bill was never among them!

He was on the track team in high school, and won several records as a sprinter. This, and a promise of a big gift from his mom if he didn’t drink or smoke until he was 18, secured his role as the designated driver among his high school friends that included Randy Burroughs and Joe Blythe.

He served in the Air Force in World War II, sending home cigarettes to his Dad and trading his monthly whisky allotment for silk stockings that he would send home to his mother. He earned the French award, Croix de Guerre and also the Bronze star. He rarely liked to talk of the war. He entered the University of North Carolina afterwards, but had to drop out shortly thereafter when his father died unexpectedly of a brain tumor. He went to work to help support his mother and brother.

He didn’t suffer the lack of book learning though. His first apartment he secured for himself and his new bride Blanche because the manager heard Dad was working with Ford. He promised to get Dad into the apartment if Dad could help him get a Ford, which he did. The apartment manager soon flipped it for a $1000 profit and Dad had a nice 2 BR for his wife Blanche and mother Carlie, who lived with them.

He had dated Blanche in high school, and went off to war at the age of 19. He nearly lost her to another marriage proposal while away in Europe, but life intervened and they were married on June 26, 1948.

Their first daughter Barbara was born a year later, followed by Roxanne (initially named Mary Anne) after 3 more years. Shortly after daughter #3 Judy was born in late 1953, they moved into their first home on Jefferson Drive in Charlotte, and Carlie, Bill’s mom, got a new apartment and re-married, to the grandfather we kids knew as Pop, Lewis Holloman.

Like his dad, our Bill too was often gone long periods for work – but Dad is quick to say he didn’t have to do it – he chose it. He loved his work, and could not wait to get up each day and head into Ford. He started as a Trainee in the Charlotte District Sales office, and as we know rose to being the worldwide VP of Marketing for Ford Motor Company, as well as an executive at Ogilvy and Mather and serving on several public company boards, including Sonic Automative and Speedway Motorsports.

Many of his dearest friends and pleasures in life came from people he met through his work at Ford. Friday nite poker games with Mary and Lee Iacocca and working dinners at the 21 Club in New York with Lee, Bill Fugazy, and Vic Damone are just a teeny glimpse into the diverse experiences Bill had in his life.

Though he balked initially, even telling Henry Ford II directly to his face that he wouldn’t go, his time in England as head of Ford of Europe opened him to innumerable opportunities and friendships, including becoming the Chairman of the International Multiple Sclerosis Society and becoming personal friends with Margaret and Denis Thatcher – just two of so many wonderful European friendships he and Blanche formed back then and nurture to this day.

He loved cars, and was a “car man” through and through. He was instrumental in getting Ford into car racing, and took Barbara and Roxy to the movie set “Winning” to meet Paul Newman and Robert Redford when they were easily impressed high school girls in the late Sixties.

Bill and Blanche’s youngest daughter Nancy, was born in Philadelphia, the first of many moves away from Charlotte as Bill developed his career as an auto executive. Nancy and her husband Jim Lievois now live in California with their two star athlete sons, Jordan (la crosse) and Tyler (baseball).

His over 15-year journey with five different forms of cancer, his open heart surgery, and his blindness from macular degeneration took him many places, both in the world and in his heart. One experience he never took on was self-pity though, and without exception every doctor has commented on what an extraordinary man he was – both his mental attitude and his physical powers of healing and determination.

Those who knew him understand that he relied strongly on the love of his family and friends as well anyone who reached out to help him – something he remembered and cherished until his last breath.

There are so many stories to tell – we hope you will leave some of yours in the comments below.

Here is a short resume.

Thank you for putting up this web site and for showing the film of Bill. It brought back many memories of the time I worked and traveled with him,and although sad, watching it was enjoyable. It brought him to life again. You captured his style perfectly.

I loved to listen to Bill’s wonderful lifelong stories he would share. I will never forget his humor, hospitality and largesse he shared with so many.

What a wonderful tribute to his life! I will always remember his quick wit, sense of humor, and smart intuitive life instructions. He was a powerhouse of a person! Never judgemental and always willing to listen. Not too many people posess the qualities this strong, but gentle man had. Yes “Mr. B.” You were truely a gentleman!! A loving husband & father to the wonderful women in your life. And to ME ..
a friend that I will miss, but always carry much admiration for , as well as 12 years of great memories!! Your legacy lives on!!
Much love!! Connie

To the entire Benton Clan:

I send my codolenses for your loss, and my blessings for sharing Bill with the world. Having been a long time friend of Barbara, I have enjoyed hours of personal history about her amazing father.

From that history, I feel the automotive industry, as well as his family, has lost another great leader. Bill, quietly ranks among the original pioneers of industry.

On a more personal note: I keep the “Bionic Man” vidieo on may favorites list. When I find myself blaming “LIFE” for my troubles, I simply “role the tape” and I am again inspired to get moving.

God Bless you all and God Bless, William P. Benton!

I reported directly to Bill when he was Vice President of Marketing Staff. (I was responsible for Corporate market research.) During this time, I worked with Bill on changing the public perception of Ford to reflect the dramatic improvement in Ford quality. It was during this time, that we worked with Wells,Rich, Greene, to develop the Ford advertising campaign of “Quality is Job One”. We also helped strengthen the use of consumer research to improve consumer demand for future Ford vehicles.
Bill was a great mentor, thinker, creative manager, and the consummate gentleman. I shall cherish my memories of time with him.

Sorry to learn about your dad, Roxanne. My step-father, John McLean, knew Bill at Ford and I’m guessing they lived in the U.K. at the same time (’72 or so).

I can still recall the day I offered Judy a ride home from Seaholm in my Mustang (compliments of Hank the Deuce), not having any idea about your father’s role in the car’s development (the press always credited Iacocca, of course). Similarly, I knew all about Jacques Passino’s role in Ford motorsports (which I had followed *intently* from age 11 forward), but nothing about your dad’s role . I still cherish a framed autographed photo of Jim Clark in the winner’s circle at Indianapolis, he having won in a revolutionary rear-engined Lotus-Ford.

I also well remember my mother announcing to me that she and John were having your parents over for dinner at our house on Waddington. I’m not sure she knew to what extent I had a horrific crush on your sister Judy. Many thanks to your parents for not immediately evicting me from your house the night I came to pick Judy up for our one and only date!

Comments on this entry are closed. 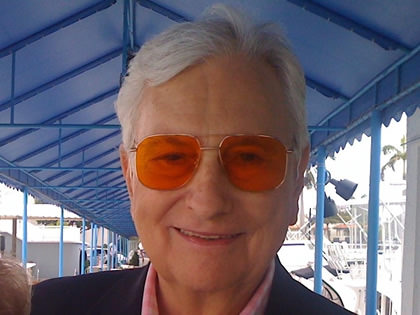