We would like to thank all of you, Bill and Blanche’s wonderful friends, for the pouring out and over of food, hugs, flowers, cards, calls, and support. Toni Johnson, Hanan Farah, and Mary Lou Quesnell have kept us especially nourished in body and soul.

Over 200 people attended the funeral service. For those of you unable to attend, we have put together a few excerpts from the day that you too may share these last few moments as we celebrated Bill’s life. (Duration: 11:21 – If you click the little square in the lower right corner of the movie player, it will go full screen for you.)

Our loved ones from North Carolina, Pennsylvania, Virginia, and Kansas as well as friends from near and far were there, along with Dad’s many precious physicians: Dr. Ajlouni, Dr. Farah, Dr. Borland, Dr. Burch. Bill’s loyal logistical support team for these past several years, Shonie Schaefer, Jo Culp, and Michael Andrews, attended with their families.

Fr. Tony Tocco of St. Hugo of the Hills, gave a beautiful service, with readings by Mike Dennis, Craig Rand, and Carlie Dennis. The grandchildren, Carlie, Annie, and Christina Dennis and Tyler and Jordan Lievois carried the flag and urn to the altar. Jim Lievois delivered a beautiful eulogy, which is included in full in the video. Live music was provided by organist Jim Gabriel and vocalist Nan Olin. Paul Connell of A.J. Desmond & Sons graciously supervised the service. Two representatives of the United States Army and a trumpeter performed Military Honors.

The service was followed by lunch at Bloomfield Hills Country Club. Though officially closed for the season, David Wilkes and staff generously opened the doors and prepared a beautiful and sumptuous buffet for us. Kathryn Zekakis and her daughters created gorgeous flower arrangements for the church and the luncheon tables. Grace before the meal was spoken by Bill’s youngest grandchild, Christina Dennis.

Keith Crain of Automotive News opened the comments and was followed by numerous people who shared their stories and memories of Bill, as Blanche worked the room with a wireless microphone, á la Oprah. Edsel Ford remarked that “Bill was the color of Ford” as his love of his job and the company and its products was in a class of its own. As counter-balancing evidence of Bill’s work ethic, JoAnn Schofding, one of Bill’s daughter Nancy’s grade school friends, recalled how she told her mother for months that “Nancy talks about having a Dad but I have never seen him and I really think she made him up!”

Meanwhile Jerry Lewis, of the infamous “Coffee Club,” recalled how Dad surprised them all one day about two years ago by telling about his Croix de Guerre and pulling out the tattered French franc from the Resistance, showing Hitler with a noose around his neck, that Bill had carried in his wallet since 1945.

We certainly hope Bill enjoyed the events of the day from his perch on high. You will be missed, Mr. B.

The two songs in the episode soundtrack are from the Podsafe Music Network:
Panis Angelicus by Evelyn Nicholson
Goodbye by Ken Kurland 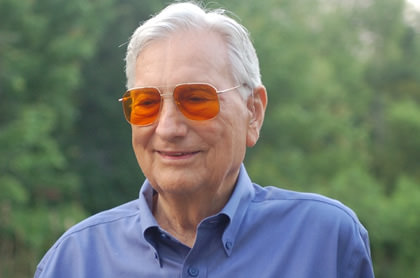